6,000 years ago, people in Europe started erecting large stone sculptures. These sculptures were in the shape of women and men with faces and arms, hairstyles and even tattoos. They also carried or wore highly desirable items such as weapons, jewellery or clothing that depicted the innovations of their time. But the stelae were also symbols of power and status, and were used for ancestor worship and rituals. These likenesses were created in an age when people were increasingly engaging in agriculture and animal husbandry, coming together in village communities and beginning to use metal. The temporary exhibition in the National Museum Zurich’s extension wing brings together stelae from a number of European countries, including new finds from the cantons of Zurich and Valais, and offers a unique insight into the world of people in the Neolithic period. 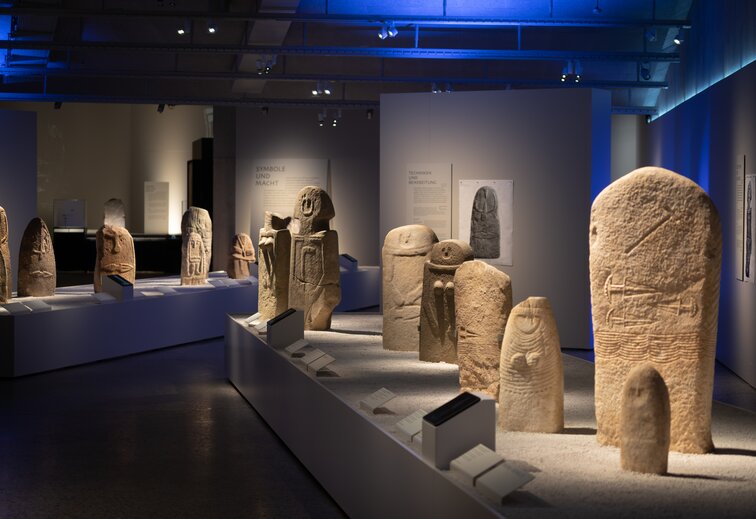 Discover the exhibition from home: virtual tour with further information and listening stations.

Guided tour of the exhibition «Humans. Carved in Stone».

Birth of the gods

5,000 years ago, people in Europe began erecting stone stelae in the shape of humans. These monuments were likenesses of ancestors that served to unify and nourish the village community through rituals, and legitimised land ownership. 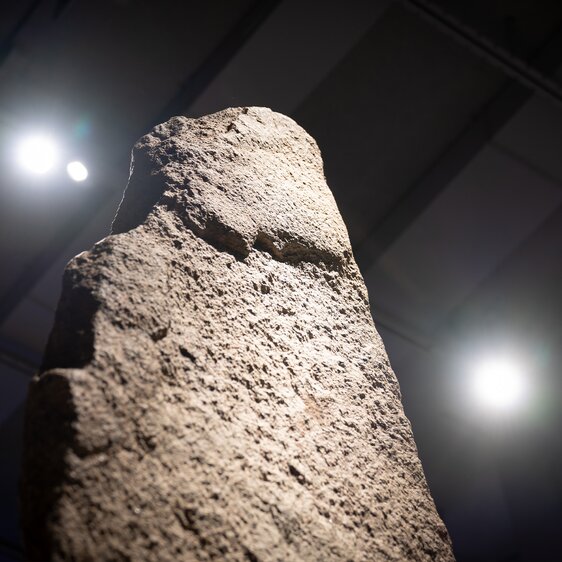 Birth of the Warriors

Stone stelas from Neolithic Europe tell of a new social class: the heavily armed warriors who were supposed to protect the property of the elites.

In its major new temporary exhibition, the National Museum displays Neolithic stelae from various European countries, offering a unique insight into the world of people who lived around 6,000 years ago.

In the Neolithic period, people in Europe began to settle down; they started practicing agriculture, keeping animals and using metal. These changes brought about tremendous societal upheaval. The stone stelae in human shape found throughout Europe, erected at great effort, are testament to this. They are among the earliest monuments on our continent. Some of the stone figures have faces and arms, hairstyles and even tattoos. Others are wearing or carrying valuable or useful items that depict the innovations of their time: axes for felling trees or for fighting, a plough for working the fields, jewellery made of copper for prestige display, bows and arrows for hunting and weapons for hand-to-hand combat.

Even today, the stelae tell of the reality of life in an era that was marked by violence and change. The growing population, the struggle for resources and jealousy led to conflicts that can be read from the stone sculptures and the places where they were found. Depicted on the stone stelae are members of the new elite, high-ranking women and men at the head of an increasingly hierarchical society. With their symbols of power, they had themselves immortalised in stone, demonstrating their exalted status. The stelae were also used for ancestor worship – for their descendants, the individuals depicted became heroes and heroines or even gods, and passed on the collective history of the clan in visual form. If those in power lost social control and prestige, their ancestors too were forgotten. Subsequent groups of people destroyed their images.

The major temporary exhibition in the National Museum’s extension wing brings together around 40 stelae from Italy, France, Germany and Switzerland, including new finds from the cantons of Valais and Zurich. The opportunity to see so many original steles from several countries in one exhibition side by side is unique. The presentation is completed by top-class original finds of weapons, tools and jewellery items depicted on the sculptures. Thus, the show offers a unique insight into the world of the people of the Neolithic period.